The Flying Kangaroo by Jim Eames

There have been many histories of Qantas Airways written over the years, most academic or textbook in their approach.  The Flying Kangaroo, by Jim Eames, stands apart and is filled with the anecdotal stories behind the legend of Qantas. From its beginnings in 1920, through to its secret Double Sunrise WWII work, ferrying Australian troops to the Pacific battlegrounds and then its prime role in airlifting survivors from Darwin after Cyclone Tracy in 1974.

Jim Eames is uniquely placed to write this anecdotal book about Qantas. Eames was a journalist, an aviation writer, former press secretary to the Minister for Aviation and former Director of Public Affairs for Qantas.  His writing style is easy to read, full of humour and an ability to tell a story.  He uncovers the larger-than-life characters who worked for Qantas in its early years, who created Qantas’s unparalleled safety record in the world aviation market.  This reader had not previously realized just how many decorated WW1 and WW2 pilots joined Qantas after their war service, bringing their impeccable RAAF training with them.  Such pilots (who later trained upcoming Qantas pilots) instilled a deep respect for airplane safety at all times.  Their moral code was reflected throughout Qantas, from flight operations to cabin and ground crew.  A Qantas plane was first into Darwin after Cyclone Tracy had passed, to assess the city and survivors, sending word back to Sydney and the rest of Australia by radio.

The Flying Kangaroo is a highly enjoyable book, recommended for anyone who is interested in Australian history, Qantas Airlines, aviation or just a good yarn.  Jim’s previous book Taking to the Skies is in the SMSA library.  Produced in 2013 it is likewise filled with anecdotes and behind the scenes stories of Australian airlines.  It focuses on Australia’s domestic airline TAA/Australian Airlines before it was acquired by Qantas.

The Flying Kangaroo by Jim Eames in the SMSA Library 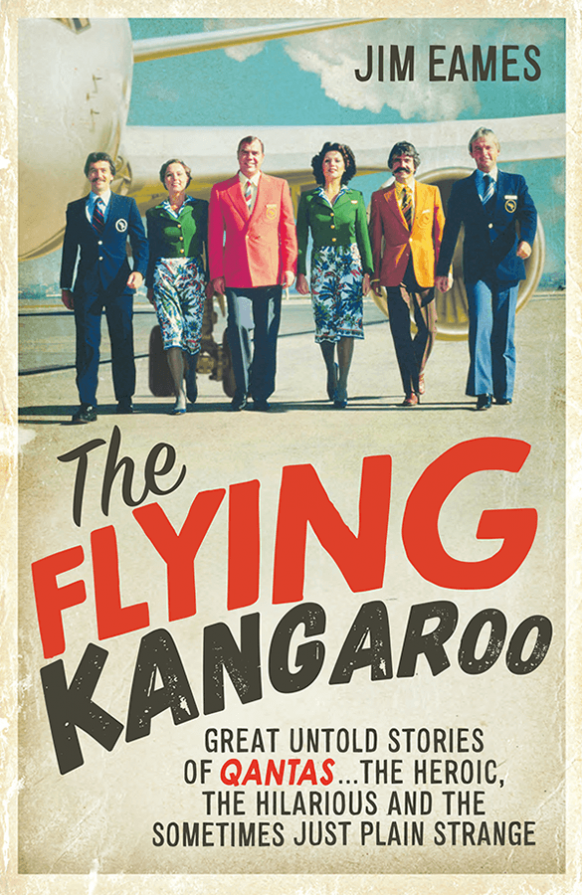