The Final Days of EMI: Selling The Pig by Eamonn Forde

After reading a review for The Final Days of EMI: Selling the Pig in an Australian version of a reputable English newspaper, I was unashamedly enthused and had no hesitation in recommending this new publication to the library staff at SMSA. My lifelong love for music has been visually reinforced by the little terrier dog Nipper staring into the horn of an old Edison cylinder phonograph seemingly fascinated by his deceased master’s voice. HMV and later EMI were part of my life as surely as Little Nipper radios.

I was delighted to receive a copy of The Final Days of EMI: Selling the Pig. Which is written by respected British author and award-winning music business journalist Eamonn Forde who has been writing about all areas of the music industry since 2000. Such was my excitement that I skipped the Acknowledgments and Prologue in my enthusiasm to begin the journey of EMI.

The opening sentence of Chapter 1 stopped me dead in my tracks as the author quickly pointed out that rather than recounting the history of EMI he would instead concentrate on the events of a single decade. He would trace, with forensic detail, the eventual dismemberment of this British, indeed global entertainment and technology behemoth. I likened my disappointment to dropping an old 78 rpm record on a hard floor and breaking it into several pieces! I was crushed and disappointed after initially assuming I would be taken behind the scenes and share intimate music industry stories including EMI’s stable of stars such as The Rolling Stones, The Beatles, The Beach Boys, David Bowie, Kylie Minogue, Kate Bush plus many others including classical artists. I was so upset that initially, I couldn’t proceed beyond the first page of chapter one!

Sanity intervened. After all, I had volunteered to write a review and was therefore obligated to. So reluctantly I started my journey. I can clearly state what The Final Days of EMI: Selling the Pig is not. That is a tell-all account of the EMI Group founded in 1931 in London. At the time of its break-up in 2012, it was the fourth-largest business group and record label conglomerate in the global music industry.

The story revolves around how Terra Firma, a private equity firm specialising in leveraged buyouts of under-performing companies, along with their main backers Citibank, purchased the ailing EMI in a deal that was then unexpectedly hamstrung by the subsequent worldwide financial crash. (cont’d) Terra Firma had paid far too much and although their strategy was to strip inefficient assets they failed to understand from the very outset that much of a record label’s value is dependent on its relationship with often awkward and difficult to deal with artists. The eye-watering figure paid by Terra Firma has been described as one of the worst private equity deals in history. It began to unravel almost immediately as the global financial crisis deepened. Record sales plummeted on the back of the emerging digital download revolution and many of their recording stars began to exit further depleting EMI’s marketable catalogue. The demise of EMI began to resemble a modern day Greek tragedy.

So if The Final Days of EMI: Selling the Pig is not a tell-all account of the history and dismantling of EMI what is it?

Eamonn Forde has greatly expanded on his original article written in 2011. His research and interviews would appear to be impeccable. However, at times the material can be technical and dry. The appeal for some readers will be found for those who understand and enjoy the machinations of corporate law and takeovers. However, the common thread that holds Eamonn Forde’s story together is the music and musicians so many readers will be familiar with. If some find the content a little too technical during the journey then simply move on because be assured you will be rewarded for your persistence.

The Final Days of EMI: Selling the Pig is a fascinating and at the same time a tragic journey. Oh! While I remember. The author’s predilection for the use of an intransitive verb to bloviate may be irritating in relation to the writings and comments of others (and possibly even his own musings) however hang in as we baby-boomers say!

The Final Days of EMI: Selling the Pig is not a yarn about sex, drugs, and rock and roll. Instead, it is a riveting exposé about the music industry incorporating corporate greed and naivety requiring a little patience on behalf of the reader.

Find The Final Days of EMI: Selling the Pig by Eamonn Forde in the SMSA Library Catalogue 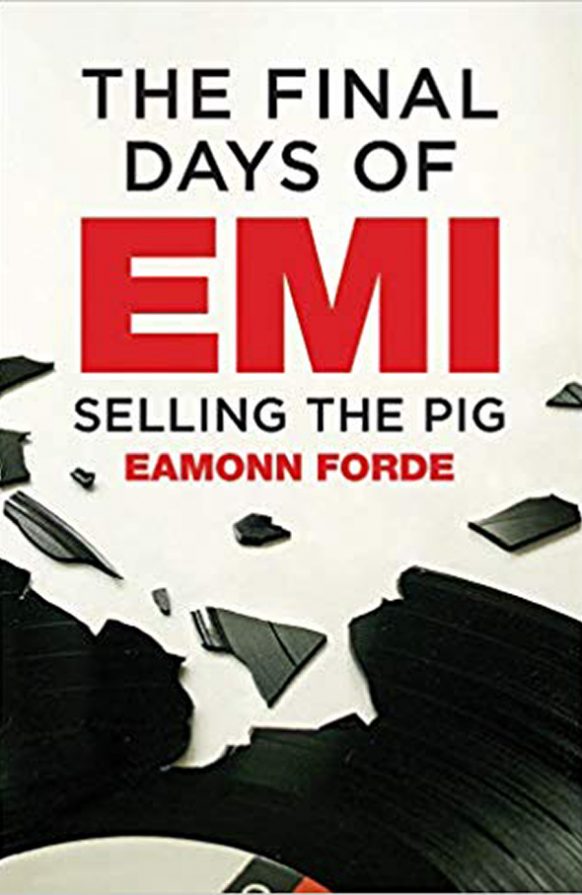