OK, I admit that I am a bit of a slave to the prize winning novels. I don’t want to sound like a literary snob, because I really am not, but I always feel that the prize winning novels must have something to set them apart from the millions of other novels that are published every year, and so I hope by reading them, I know I will have a good book to read. Of course, there are millions of other good reads, but I guess I hope that this will take the guess work out of the equation.

In the case of Less by Andrew Sean Greer, I am definitely on a winner! Less won the Pulitzer Prize this year and I so enjoyed the book, partly because it is so eloquently written and readable, but also it is FUNNY, and it feels like a long time since I read a book that made me laugh out loud.

Meet Arthur Less – somewhat moderately successful author. He is approaching 50 years of age (something that many people have trouble dealing with), and his some time boyfriend has just invited him to his wedding. He is not in a happy place, as his most recent novel has been rejected by his publishers as well.  So, in a bid to avoid the wedding and his failures, Less grabs a host of invitations – interviewing a famous author in New York, a prize-giving in Italy, a teaching fellowship in Germany, a nomadic adventure in Morocco, a writing retreat in India, and finally some food journalism in Japan – circumnavigating the globe, reflecting on his own past as he goes.

I don’t want to ruin this book by badly relaying some of the funnier lines or events, so I will leave you to it –  but let me say: Arthur Less, as a character, grows and grows on you. You start to love him for his failures and self deprecation and general lovableness. His travels takes him on a journey not just around the world, but a journey to learn more about himself (he realises that he has spent his entire life “not alone”, learning that he is a “bad gay”, that really his life is not a failure).  There are some hilarious slapstick-like scenes which have you laughing out loud, and yet little travelogues at each destination. So you will just have to trust me on this one. Less is a totally enjoyable book, with some lovely writing and at last an endearing lead character! 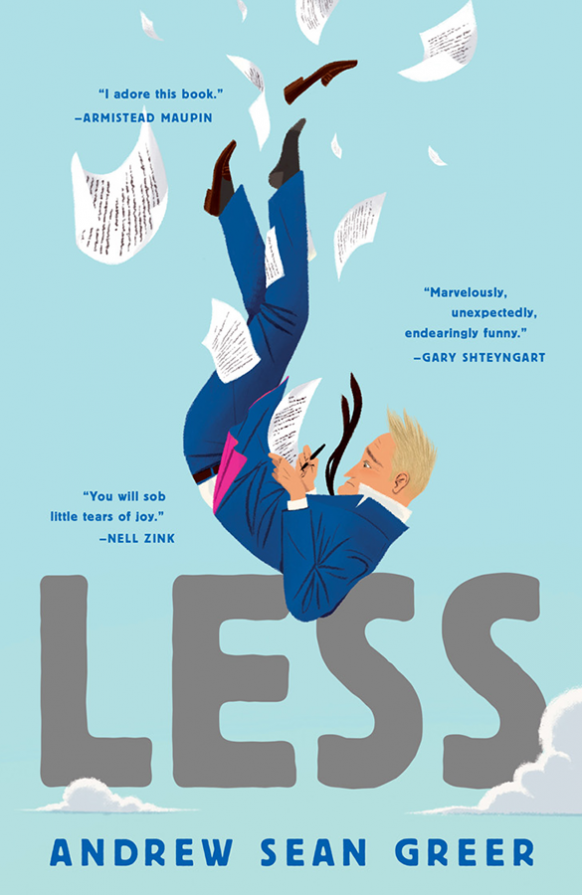