Angels and Insects by A S Byatt

Angels and Insects consists of two engaging novellas, ‘Morpho Eugenia’ and ‘The Conjugial Angel’, both of which are set in the late Victorian era.

In the first, ‘Morpho Eugenia’, William, a scientist and naturalist has recently been shipwrecked on his return from Africa, losing most of his specimens and rendered penniless. One of his wealthy patrons engages him, out of sympathy, to sort and catalogue the large but chaotic scientific collection the patron has accumulated over the years.

Whilst desperately aware of his ‘in between’ status in the Alabaster household, William falls desperately in love with the eldest daughter, a beautiful, pale, blonde girl with an aura of tragedy. He attempts to woo her with a display of butterflies and moths in the conservatory attached to the house, which goes awfully wrong. Nevertheless, Eugenia appears to overlook William’s shortcomings (as he perceives them) and accept his suit, somewhat surprising him.

In the subsequent years of his marriage, William is happy enough although he struggles to reconcile his experiences in Africa with this tame, constrained world in which he finds himself. He also attempts to regain a sense of purpose and independence, working with the other ‘in between’ person in the house – plain, mousy Matty the governess – to create field experiments for the younger children, including one lengthy project tracking the behaviour of ant colonies. They begin to co-write an educational book for children on ants, in which he writes the more scientific parts and Matty writes fables with truths hidden inside.

But there are secrets in the household — secrets that are hidden in plain sight — and one day the household seems to simply decide that the veil be lifted from Williams eyes, with far reaching consequences.

‘The Congugal Angel’ concerns two women who run genteel seances for their wealthy clientelle who seek to have their questions answered. Having become involved with Spiritualism while attempting to contact her husband, a captain who was lost at sea over ten years previously, Lilian Papagay now works with a talented, but somewhat odd, medium Sophy Sheekhy.

Mr Hawke is obsessed with Swedenborg, wanting a definitive spiritual experience or vision of his own (and Mrs Papagay’s hand in marriage). Mrs Hearnshaw quietly mourns her little ones who died in early childhood, trying to understand why. Then there’s Mr Jesse and Mrs Jesse who is the somewhat excentric sister of Alfred, Lord Tennyson, and keeps a pet raven that sits at her shoulder. Before marrying Mr Jesse, she lived in a spinstered/semi-widowed state as the former fiance of A.H.H., the subject of Tennyson’s In Memoriam, shocking her family and friends when she chose to marry instead of perpetually mourn. And so she seeks absolution.

We follow the group through several seances, with cryptic messages are delivered by automatic writing and various other Spiritualist means, each cutting closer and closer to the pain of each of the participants. Sophy Sheekhy, the medium, suffers for her art and begins to have visions in her own home unbidden as a particularly persistant spirit presses to have his message delivered. Sophy warns Mrs Papagay that there is a dangerous frission just before they start the last seance in which there are visions and revelations that will leave them all changed.

A S Byatt sometimes has a reputation of being a bit obtuse, but that shouldn’t stop you. Angels and Insects can be enjoyed both by those who want to dig to their heart’s content for meaning — but the novellas are also, quite simply, just a good, satisfying read.

Angels and Insects by A S Byatt 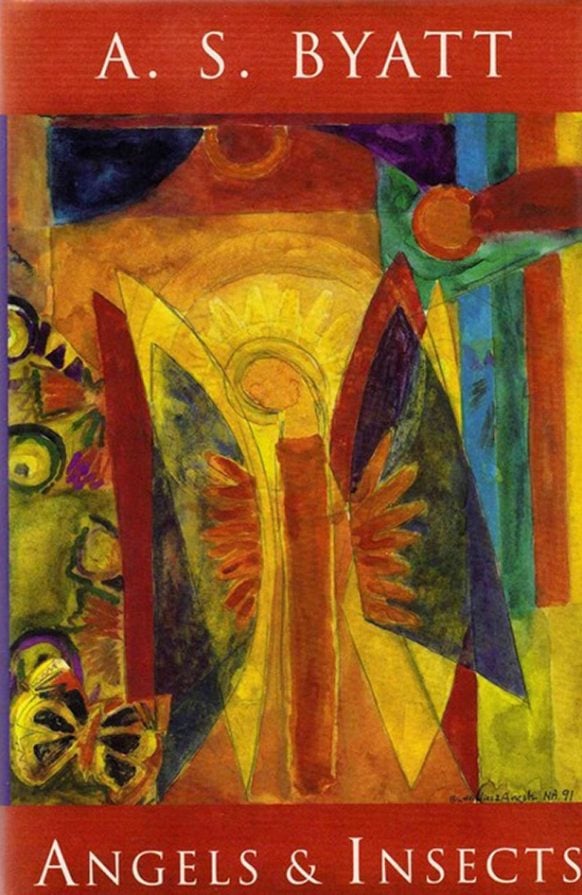