Americanah by Nigerian writer Chimamanda Ngozi Adichie was shortlisted for the Man Booker prize in 2015.  Adichie has written several books, and I can thoroughly recommend her as a storyteller, but also as a writer who deals with culture, society and class in an open and interesting way.

First and foremost I would say that this novel is a love story.  It is set at first in Nigeria, when two teenagers (who are not from wealthy backgrounds) who have similar ideals and dreams, fall in love. Efemelu, who is a determined and opinionated young girl, and Obinze, whom I would say is a romantic at heart, with notions to live in America upon graduation.  Efemelu gets her chance when an opportunity becomes available for her to study post-graduate in Philadelphia, whilst Obinze tries his luck in the UK a few years later.

The romance between Efemelu and Obinze is great reading –   a sort of “one true love” story between two people whose lives diverge in different directions for many reasons.  It is a great story, but intertwined in this, Adichie looks at both the USA and the UK in relation to their class and society.  Obinze in the UK is struggling to get his national security number, succumbing to paying off someone so he can work and earn a wage.  He becomes stressed and anxious as he reads about illegal asylum seekers and the government’s desire to clamp down on illegal immigrants.  Obinze meets up with an old friend from Nigeria, who is married in the UK.  He is invited over for dinner, and whilst the company are terribly politically correct, Obinze thinks to himself :

“They would not understand why people like him, who were raised well-fed and watered but mired in dissatisfaction, conditioned from birth to look towards somewhere else… were now resolved to do dangerous things, illegal things, so as to leave, none of them starving, or raped, or from burned villages, but merely hungry for choice and certainty.”

Efemelu, whilst she is legally in the US, struggles to the point of desperation, to get a part time job.  People speak to her as if she cannot understand English, and purely because of her skin colour, she is singled out in class as someone who can relate to the “plight of the African Americans”.  For Efemelu, who has never encountered anything such as racism in her own country, it is something that she very quickly becomes aware of in the US. It is her new awareness that she is not a black American but an African American that starts her on the path to her blog which she writes with titles such as “To My Non-American Blacks : In America, you are Black, Baby”.

I enjoyed reading about how their lives unfold – separately and together upon their return to Nigeria.  The changes within the country and their attitude towards it, made this book an interesting and thought provoking read.  The characters, whilst sometimes irritating (who isn’t?!) are well developed and the description of living in these different countries gave me an idea of life in a country I knew little about.

Americanah by Chimamanda Ngozi Adichie in the SMSA Library Catalogue. 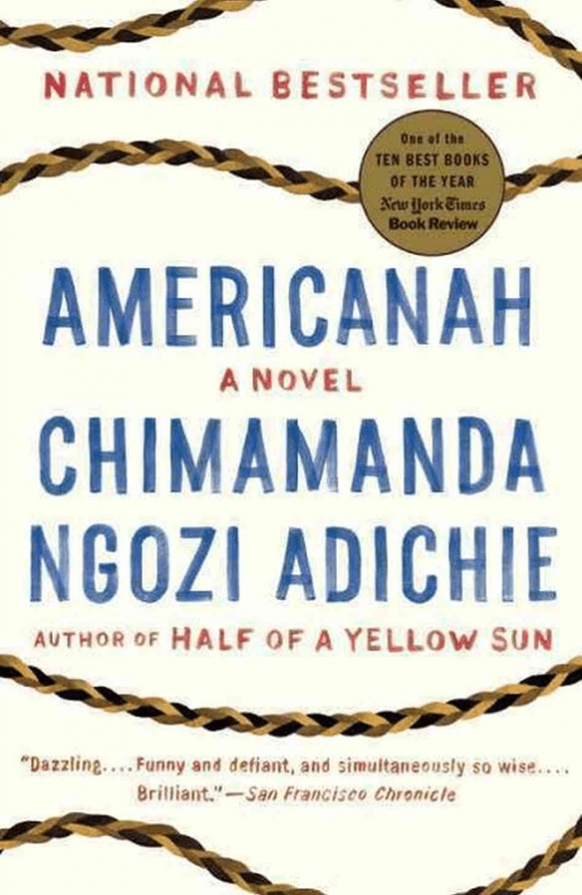