Many moons ago, the SMSA Librarians recommended to me the Benni Harper Mysteries by Earlene Fowler. The series begins with Fool’s Puzzle, and has continued with fourteen more, the majority of which the Library holds.

Each of the book titles are named for an American quilt design and are indicative of the book’s plot.  The first book introduces Benni Harper, a recently widowed young woman who lives in the Californian township of San Celina with her widowed father Ben and his mother Dove.  The town is a rural spot between the Pacific Ocean and the nearby mountains, with a Western and Mexican cultural mix.  The Harper family ranches in the nearby foothills, raising cattle for a living, though Benni has taken a full time job as curator of the local folk-art museum.  It is whilst she is hanging quilts for an exhibition that the first murdered body is discovered.

The running joke through this series is that Benni inadvertently sets about solving crimes, despite her own best intentions and promises to the handsome, local, police chief Gabe Ortiz to stay out of trouble!  Devoted readers of this series know that Benni and Gabe eventually marry, and future books describe with humour the fine line Benni treads in sleuthing without incurring the wrath of her husband.

The series is a pleasure to read.  The author writes with fine description of the township and surrounding counties of this part of California (loosely based on the real San Luis Obispo), the weather changes, residents and summer tourists.  Often the quilt highlighted in the book is just the beginning of the mystery.  In one book, the quilt’s maker is mysteriously killed; in another book, the actual quilt’s design hides a monumental secret.

In between solving crimes, the books are alive with tales of Benni’s large family, her relatives back in Arkansas, her old school friends and teachers in San Celina.  After Benni and Gabe marry, future books deal with Gabe’s PTSD nightmares from his years serving overseas in the Armed Forces, then as an undercover police officer in LA.

Thoroughly recommended for mystery/crime readers who like small-town American settings.

Find the Benni Harper Mysteries by Earlene Fowler in the SMSA Library Catalogue. 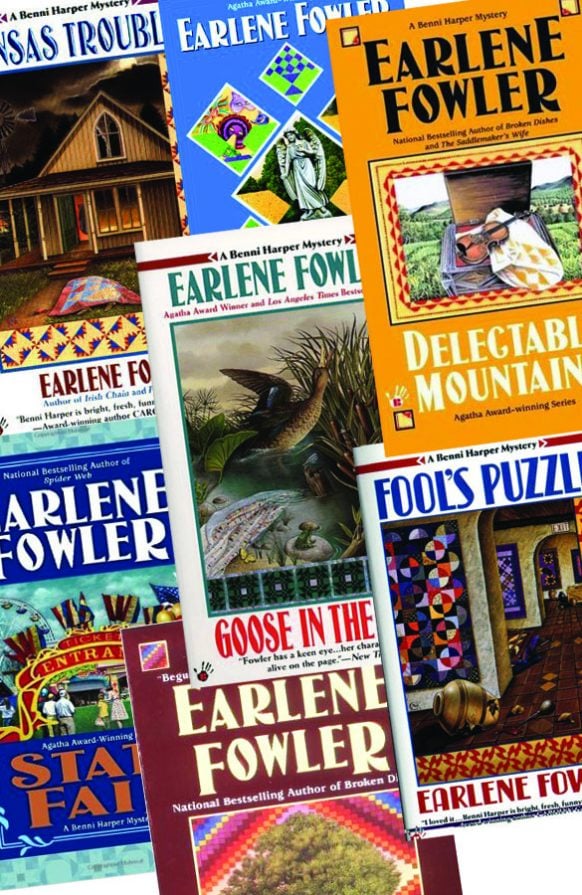