As the sole child in my family, and female at that, my engineer father bowed to the demands of wifely and parental expectations, furnishing my childhood with toys appropriate for a young girl.  I wish now he had resisted social mores and provided a Meccano No 10 set instead!  Meccano by Roger Marriott is a small but beautifully written and published book, sharing an eye opening introduction to the fascinating world of Meccano, one of the most successful and popular toys of the past century.

As so happens with the best ideas, Meccano founder Frank Hornby initially invented a toy which would introduce his two young sons to the world of mechanics and engineering.  The toy was not just a carved one-off creation but made of separate metal parts, girders, nuts, bolts and cogs which would assemble into a multitude of toys and models.  With clever and astute advertising, continuous R&D into new parts design, Meccano Ltd of Liverpool grew into a worldwide business, gaining an (almost) immediate (mostly male) devoted fan base of all ages, making the “Toy that Grows with the Boy”.

Marriott’s book is printed on high gloss paper, with historic colour photographs and advertisements crammed onto each page.  The reader can follow the story of Meccano as it developed, from humble beginnings in 1900 through to the present day.  I had always wondered why the early Meccano boxes were the same shade of green as Hornby train sets, and was pleased to learn that Mr Hornby invented both toys, plus Dinky Toys along the way.

This little book would entertain any fan of company history, of English toys and of how English companies survived through both WWI and WWII materials limitations.

Find Meccano by Roger Marriott in the SMSA Library Catalogue 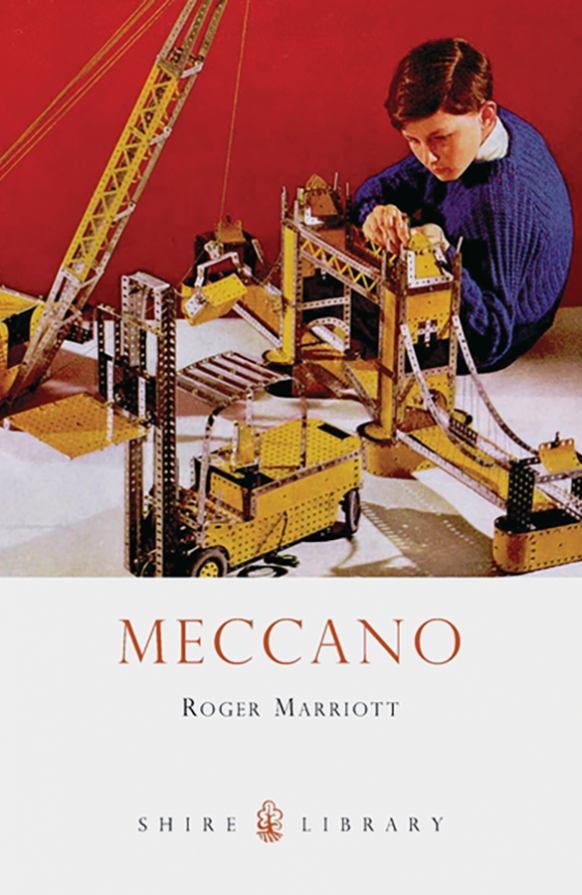