Brother of the More Famous Jack by Barbara Trapido

I picked up Brother of the More Famous Jack by Barbara Trapido on a whim as I rushed out of the library a week or two ago. I thought it looked OK, although I knew nothing about it. However, it was a perfect size for my requirements — small and light — as we were heading away for the weekend and I didn’t want to carry the other enormous tome that I have been reading.

It was a last minute decision that worked out way better than expected, as I loved this book. I have not read any other books by the author Barbara Trapido, but I have now put her on my “high priority” list of authors to read.

The story is narrated by the main character, Katherine. She is a young and impressionable university student who is taken under the wing of her philosophy lecturer, Jacob Goldman. I quite liked Katherine, she reminded me of myself at that age — impressionable, naïve and trusting of everyone. I like how when she is having a crisis she goes back to her favourite novel, Emma. And I like how you can see how much wiser she becomes throughout the course of the book.

She is invited to Professor Goldman’s home by way of a prospective lover and there begins her love affair with the Goldman family. Jane, Jacob’s wife, is sharp-witted and mesmerising, wise and beautiful, calls a spade a spade, she loves her family dearly, whilst recognising the strengths and weaknesses in them all. Her two sons, Roger (beautiful, moody, intelligent) and the younger Jonathan (also smart, but volatile) are strong and precocious, yet strangely likeable in different ways. Katherine becomes involved with the darker Jonathan, which leads to heartbreak and a trip to Rome to deal with her heartache.

Whilst this essentially is a story of growing up, love, disillusion and romance, don’t let that put you off. The characters, whilst at first a little hard to warm to (except for Jane), were described in such a way that they just grew and grew on me – all their nuances, the differences between them all, the way they connected to each other within their family and with Katherine made me adore them all, flaws and all.

There are some satisfyingly funny comments that made me giggle to myself, observations on life and opinion.

“On the pebbles where we stripped to our bathers, I discovered that Jacob’s chest hair continued black and copious over his shoulders and all the way down his back. It grew in tight curls along the breast bone and straightened out over the shoulders where it lay in smooth inch lengths. I stared at him surreptitiously, like a kid sizing up a hunchback.

‘Say,’ Jane said, who had noticed my gaping, ‘you really are most immoderately and unnaturally hirsute, aren’t you, my husband?’”

I also feel it looks at the changing roles of women — Jane, the capable stay at home mother of 6 children, Katherine, earning a degree and in the end determined to make a living working hard and supporting her husband. The men remain infatuated with the women in their lives, and I feel that if you called this novel a “coming of age” novel, you wouldn’t be far wrong, but it was a jolly good read — perfect for my weekend away.

Brother of the More Famous Jack by Barbara Trapido 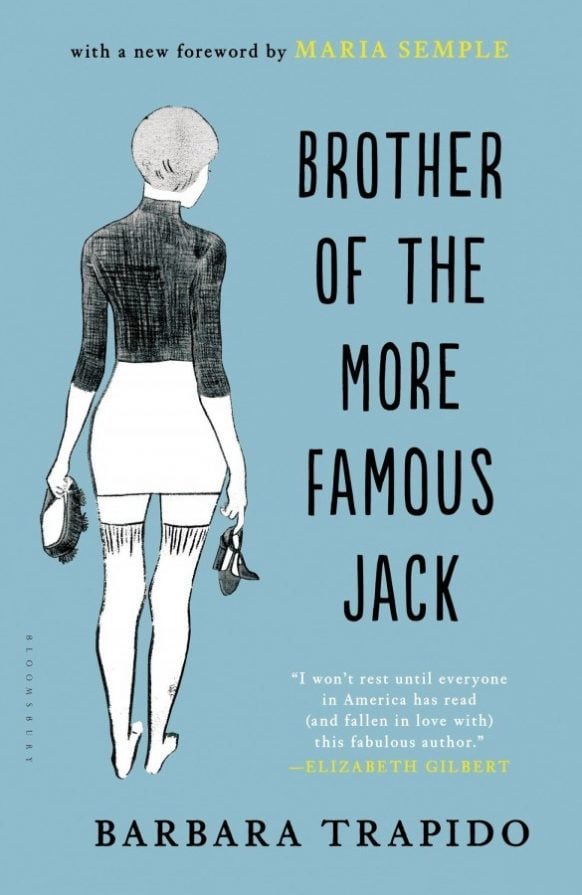